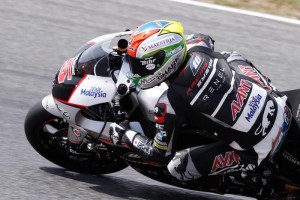 Both Johann Zarco and Alex Rins fought back from difficulties to claim 1st and 2nd respectively in Moto2™.

Ajo Motorsport’s Johann Zarco started the Gran Premi Monster Energy de Catalunya from the best possible position, pole. Sadly this advantage did not last long for the Frenchman who saw himself swallowed up in the run to Turn 1, eventually forced to sit the bike up as a rider went under him. Zarco ended the first lap in fifth, dropping as low as sixth in the subsequent laps of the Barcelona track. “Lowes broke late and I got pushed in the first corner. I had to keep calm during the race and I had enough energy to keep pushing,” he commented after the race.

From lap six onwards Zarco began to pick his way forward, beginning the penultimate lap in second spot behind Tito Rabat (Estrella Galicia 0,0 Marc VDS). A flying final lap of 1’47.646, as well as a Turn 10 mistake from Rabat, allowed Zarco to clinch his second victory of the season.

End of race comebacks are not unknown to Zarco, the Frenchman putting on a similar performance in Mugello although he was unable to pass Rabat. With Moto2™ often a very physical affair, especially in the opening laps, the ability to recover from an early knock is critical.

Jonas Folger (AGR Team) was also forced wide through the opening corners alongside Zarco. The German, who had started second, was as low as 14th at one point but recovered to seventh by race end. Unlike Zarco, Folger was unable to set dramatically faster times towards the end of the race, his pace peaking at mid distance.

Alex Rins (Paginas Amarillas HP 40) also had a comeback at the Catalan GP, although his was a return of form. Prior to Round 7 of the Moto2™ World Championship Rins had failed to finish inside the top ten for three successive races, scoring points on just one occasion. This came after two podiums in the opening three rounds and some feared that rookie Rins may have lost his way in the middleweight class after his spectacular start.

Confidence plays a major role in motorcycle racing, too many bad results can begin to play on the minds of some riders and their results can continue to fall as they lack the confidence to push the bike and themselves to the limit. Many top riders have fallen victim to this turn of events, especially in a class such as Moto2™ where the racing is so close between so many riders. This result will have restored any confidence Rins may have been missing after three disappointing rounds and should see the rookie back at the front and continuing to impress.